There are some times in life, when it feels as though the universe is conspiring to make something happen – and there are times when it feels the opposite is true.

This was one of the latter times.

We were really looking forward to our second attempt at an off-the-beaten-path hike through the Grand Canyon that Jonno had pieced together. The plan was to drop into the dry Little Colorado River (LCR) canyon near a viewpoint on Navajo land and follow this north, then west for 1.5 days until we reached Blue Spring (and could get water), and then for about a day further still to the confluence with the Colorado River. From there, we would follow the Beamer trail west for a day, and then ascend the Tanner trail to climb out of the canyon.

We’d first attempted to do the hike right at the beginning of our US adventures in June, but a strongly voiced park ranger, who “could think of no place in hell I’d rather be at this time of year than down in that LCR canyon”, talked us out of it . Given that we were in the middle of what we later found out was a significant heat wave – and that we would have had to carry water for 1.5 days – that was probably good advice, although we were very disappointed at the time.

As we were looping back past Arizona again in October after flying back into LA from our friends’ Jen and Todd’s wedding in New Zealand, we booked permits to do the hike then. This timing coincided perfectly with when our great friend Chantel was coming to the US, and she was super keen to hike the Grand Canyon too!

Well, despite all this planning, it just seemed that this hike wasn’t to be.

Our flights from New Zealand over the US were delayed by 24 hours. Then we arrived to find that recent rains had turned the normally dry upper reaches of the LCR into a raging (virtually undrinkable, and also potentially unnavigable) chocolate milkshake. Nonetheless, we tried to scout the entry route into the LCR and while we were 90% sure that we’d found a good route down, it was very steep and sketchy – and probably not ascendable if it cliffed out in parts that we couldn’t see. Still not fully dissuaded, we went to see about Navajo permits – and turns out they’d shut the office early and wouldn’t reopen for 3 more days. In a last ditch effort, we went to the Parks office to discuss options for going in anyway and seeking permits retrospectively – but were strongly advised not to…

So we looked for a Plan B.

Soon, we had our permits for what turned out to be a wonderful alternative – a return trip down the Tanner and northeast along the Beamer to the confluence with the LCR. Given that the normally breathtaking Blue Spring (a real feature of our initial hiking plan) had certainly lost its trademark colour and clarity anyway, it seemed like a pretty good option.

Day 1 – Down the Tanner Trail

After a great night of free camping on some BLM land near the Grand Canyon, we arrived at the Tanner trailhead at around 10am, after the usual amount of pre-hike packing, planning and pfaffing.

We were soon hopping our way down the steep switchbacks that lead into the canyon. We stopped for lunch about halfway into the canyon under the shade of a tree at a plateau, admiring the beautiful, muted red, orange and green hues of the canyon were all around us. 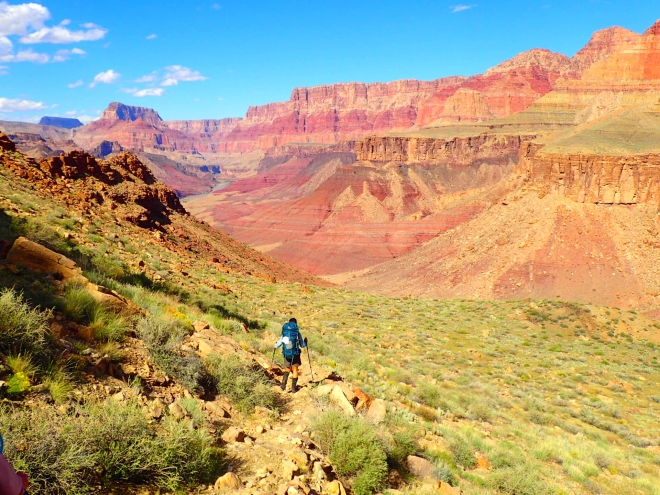 It was another couple of hours before we reached the Colorado River at Tanner Beach – around 1400 metres below our starting point, over 14.5km. After a short break, we turned east and walked for another hour or so, to find a campsite near Palisades Creek, just under 5km from Tanner Beach. Our legs were tired from the steep descent for the day, and we pitched our tents on the hard sandy bank of the Colorado River for the night just before the sun set.

Attention soon turned to the need for drinking water, with the Colorado full of mud. We filled all our bottles and cups to let the water sediment out, but fortuitously (and unsurprisingly), my patience for a cup of tea ran out and I tried boiling the turbid water hoping that the tea would disguise the mud – and found that the boiling caused rapid sedimentation of the water – a neat trick!

Day 2 – The confluence with the LCR

We woke early the next morning, keen to continue up the Colorado for around 10km to the confluence with the LCR and to explore as far beyond as we could. The trail took us around some very steep drop-offs that we preferred not to look out over – and offered incredible views up and down the canyon.

At the confluence, we could see that the muddy water was coming from the LCR – and that if we could just cross the LCR, we could then get much cleaner water from the Colorado upstream of the confluence. We spent 30 minutes trying to wade across, but the soft, sludgy bottom combined with the strong, deep flow of the LCR was too challenging.

So we resigned ourselves to another night of sedimentation, and went exploring up the LCR canyon, and quickly found a little shelter that was built into the rock side of the canyon by Ben Beamer, a miner who had been living here around 100 years ago who is credited for having constructed the Beamer trail (hence it’s name), which most likely followed older Hopi Indian trails.

We picked our way up and down the LCR canyon a little more, before returning to the confluence for an early lunch.

We were sitting beside some salt pools, which the ranger had explained to us were part of a still going initiation rite for the Navajo and Hopi Indian tribes. Youths must find their way down into the canyon, collect a bag of salt from the bank of the river, and return back to their tribe with it – a trip that would often take weeks.

We found an even better campsite that evening, nestled in amongst the trees and well protected from the wind, and soon had our tents set up and were ready to celebrate our one year wedding anniversary! Jonno had carried a bottle of anniversary wine that our friends’ Cheryl and Alex had given us over from Australia and all the way down into the canyon. Only when we went to open it, did we realise that it was an old-school corked bottle and we didn’t have a corkscrew! But then, who needs one when you have hiking poles?

Jonno McGyver’s a solution to a corked bottle of wine

On our final day, we started early to get as much shade as possible and retraced our steps back along the Beamer, and up on the Tanner. Those 1400 metres felt a lot harder on our thighs and glutes, and we were glad to reach the top by mid-afternoon and headed off in search of a shandy!

Chan powering back along the Beamer towards Tanner Beach

Big smiles to have finally reached the top!

4 thoughts on “A Grand Anniversary”