The further north-west we drove towards Utah, the higher the thermostat rose, with both our sweating, red faces and Sherman’s engine attesting to the fact. We subsequently found out that we were in the middle of a heatwave in the Utah desert, but our blissful ignorance of all news and current affairs left us naively persisting with our fore planned driving and hiking itinerary, before we landed on the best way to beat the heat: in Utah’s many, amazing canyons.

Zion National Park greeted us with awe-inspiring layers of all shades of red, yellow, white and purple rock carved out into the most magnificent array of vertical structures on all sides.

According to the Dulux color charts, the range spans from Butterscotch Tempest to Pink Chablis to Iced Cranberry to Razz Berries. There is plenty of Chinatown Orange, Bongo Jazz, and the occasional splash of Mardi Gras.

Even when the main canyon – through which the Virgin river runs – was still some miles away, the cliffs and peaks that withstood the forces of all the tributary creeks and flows over millennia still stopped us in our tracks as we drove the windy roads through the western section of the Park.

We didn’t waste any time once arriving in the main section of the Park, and promptly headed out towards the Narrows – the upper section of the Virgin River canyon, where you can wade through the river – and the crowds – upstream to where the canyon walls narrow. Whilst the canyon was beautiful, we were shocked by the volume of people, feeling as though we’d landed in a theme park, rather than a national park! Fortunately, the further upstream we went, the fewer people we encountered – and soon we found ourselves really enjoying the cool water and the beautiful, deep canyon.

The next day, we woke at the crack of dawn to climb Angel’s Landing – planning to beat both the crowds and the heat – being mildly successful on both counts.

On the scramble back down from the viewpoint – which gave epic views up and down the main canyon – we met a local adventurer Philip, who’s brain we eagerly picked on all the best local canyons to explore. We’d come over to Utah armed with notes from Jonno’s canyoning buddy, Richard – including a spreadsheet that even impressed Jonno – detailing the type and difficulty of each canyon. Rich had strongly emphasised to avoid canyons that have a particular feature not commonly seen in Australian canyons: potholes. Potholes are basically big holes in a canyon, drilled out to large proportions by gritty water over hundreds of years, with deep, smooth walls that are virtually impossible to climb out of. Canyoneers resort to all sorts of creative approaches to escape these natural obstacles – pack tosses, sand bags, partner hoists to name a few. Many an unsuspecting person has gotten stuck before – and when they’re full of icy cold water, succumbed to hypothermia.

With Philip’s advice and Rich’s notes, we soon found ourselves at the Park’s office, applying for any permits that we could get our hands on for pothole-free canyons. We headed off early the next morning to explore Pine Creek Canyon. The canyon begins on one side of the 1.1 mile long Zion Tunnel, and, after passing beneath it, loosely follows its path until you emerge on the other side. Pine Creek had a few great rappels, some icy swim-through sections, and beautiful tight, etched out walls. The best bit, though, was the huddle of shady and secluded rock pools downstream of the canyon where we could sit in the sunshine, listening to the birds around us, as we could warm up and have lunch. 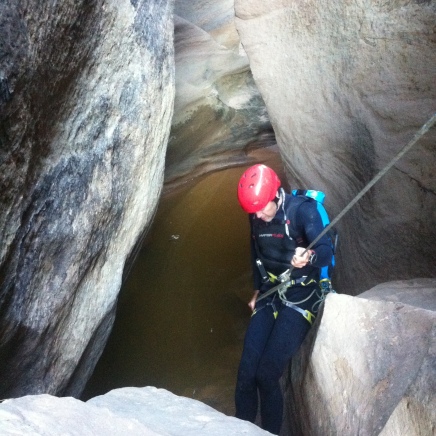 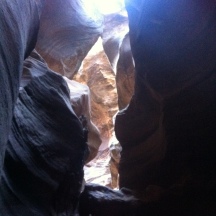 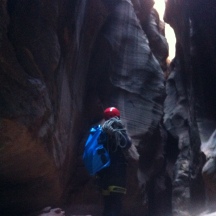 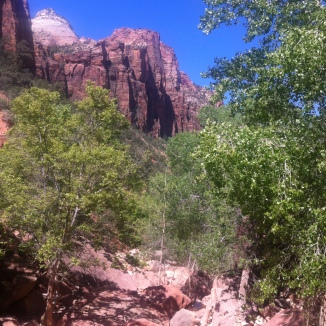 We had so much fun that we went straight back to the Parks office to see what other permits we could get, and managed to score some for Keyhole that afternoon, and Middle Echo the next morning.

Keyhole is a dry, relatively short canyon, easily accessed from the side of the road with red, sandstone walls that form concentric waves as you squeeze through the narrow gap carved out by the ephemeral creek that at times runs through it. 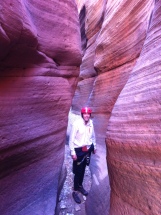 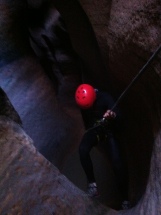 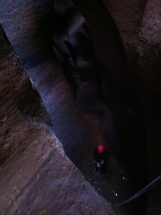 Middle Echo, by contrast, is a wet – and extremely cold – canyon that, despite our intentions to avoid them, included our first pothole. We had been well reassured that this was relatively easy to escape, but as Jonno stood chest-deep in the frigid water waiting for me (so that he could launch me up and over the rim of the pothole), we both quickly understood why these can be so dangerous.

The power of the water that flows through these canyons (into Middle Echo), to wedge this tree in sideways! 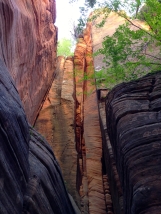 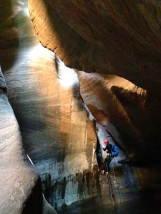 En route to Middle Echo Canyon, we’d hiked up to Observation Point – which gave a stunning view of the Zion Canyon – and on the way, met a friendly local who’d spotted our helmets and canyoning pack, and proceeded to fill us in on more of the local canyoning gems. Road Trip Ryan’s website was one of these, which contains excellent and comprehensive descriptions of canyoning and climbing routes throughout Utah!

We hustled back to our self-appointed ‘basecamp’ at Springdale council park (replete with picnic tables, shady trees, barbecues, powerpoints and an adjacent library with wifi!), to research our next canyoneering adventure: Robbers Roost.

Before we knew it, we were abusing Sherman with a 40 mile jaunt on the most punishing, corrugated, potholed road to the middle of nowhere: Larry’s Canyon.

Much to our surprise, when we finally arrived, we found a small camp set up at the entry point! We soon met the gang of fellas from Boulder, Colorado, who’d come over for a long weekend of canyoning in Robbers Roost – and who very kindly offered to shuttle our car to the exit point of the canyon the following morning. We were delighted to avoid the 5 mile hike in the hot, desert sun – and as it turned out, we were incredibly lucky they did.

Larry’s canyon was breathtaking – as with those in Zion, it was tight and deep and the walls etched out to form amazing patterns and textures. 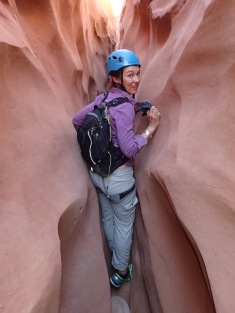 About half way down the canyon, the harsh rock ripped through Angie’s backpack and, as she rappelled down a short drop, the lid of her water bottle that was protruding through the hole was unscrewed by the rock and emptied out beneath her. 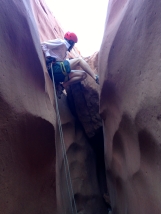 Whilst the canyon itself was shaded and cool, by the time that we exited into the wider river bed, the sun was beating down on us to the tune of 115F. The 1.5 hour scramble out of the canyon and up onto the plateau above soon turned into a race to get back to the van and the water inside before dehydration and heat exhaustion struck. We were so grateful to have had the car shuttle, and our big water barrel inside! 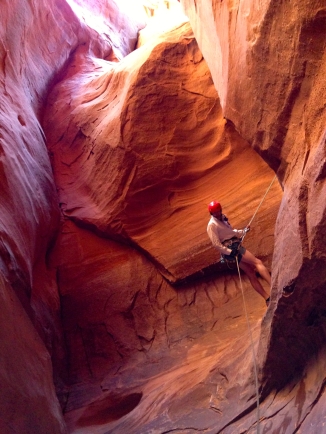 Our last stop in Utah was Moab, famous for the slick-rock mountain biking trails that are proliferate around the town. While we were waiting for the day to cool enough to get out on the bikes – and to catch up with our friend Ian who was meeting us there – we headed out to Professor Creek for one last canyon. The road out to the Creek follows the Colorado river to the north of the town, a beautiful experience in itself to wind alongside the fast-flowing water gazing out at the tempting sets of rapids, and vertiginous cliffs on the north side.

Upon arriving at the trailhead carpark, we eagerly set off along a well-marked trail towards what we thought was the entry point into the canyon. An hour later, we met a couple en route to the same canyon, and we collectively realised that we’d all taken the wrong trail – unnecessarily sweating it out in the full-sun, when we should have indeed been following the creek itself up, knee-deep in its cold water!

We all hiked back to the carpark, where our newfound friends decided to abort the mission due to the rising thermostat, while we still couldn’t resist the lure of a day in the cool creek. We followed the creek upstream for around 1.5 hours, before finding the little exit gully. We then had a steep scramble up crumbly rock and scree to the canyon rim, before hiking across the oven-like terrain to where we could drop back into the head of the canyon.

We were relieved when we finally reached the distinctive ‘dome’ like hill that marks the head of the canyon. We dropped down in, and what followed was the most enjoyable combination of short, easy rappels, slippery slides and splashing downstream through the creek until the final, 10 metre rappel down a waterfall.

From there, we followed our tracks back down Professor Creek towards the carpark, lapping up the cool water and the shade. It was a great way to wrap up our canyoneering in Utah…

We lost our leatherman up top of one of the short rappels, and had to climb back up to get it – dirty success!

And a rinse off afterwards 🙂

Road Trip Ryan gives excellent details for canyoneering (as it’s called in the US), hiking, climbing and rafting in Utah. He’s got the website, and an app that you can download. Note, the GPS points are all in UTM format!! We made the mistake of not double checking before heading out…
Mountain Project and MTB project are two free apps that also give loads of info on climbing and mountain biking areas throughout the US, well worth downloading!

Angie arrived in LA early on the morning of 10 July, and despite Jonno’s big hopes for a romantic reunion and to regale her with tales of his Mt Logan escapades, she promptly fell asleep and stayed that way for the next two days, battling jet lag and the aftermath of too much fun in the weeks before leaving Australia.

Not dissuaded, with one eye on the road and the other intently focused on Sherman’s  temperature gauge, Jonno drove straight to a small town in northern Arizona called Page, eager to get onto the trail for the first of our long-awaited forays into the American wilderness. Our first was to be to a rock feature nearby called the Wave. As we bumped along a ridiculously corrugated dirt road during the night, Angie marvelled at how Jonno had stumbled across this seemingly obscure and exciting hike for us. Taking advantage of Angie’s jetlag, we woke up at very early next morning and set off in the darkness, with our trusty internet printout guiding us through dry creek beds, across little sage fields and over saddles and rock features in our mission to reach the Wave by sunrise.

We weren’t disappointed – the multi-coloured layers of sandstone had been carved out by rock and water into the most beautiful and mesmerising curved walls and patterns.

We scrambled around the Wave for 45 minutes, delighting in the colours and textures, and commenting on how sad it was that the other couple of folk we’d seen parked at the trailhead probably didn’t even know that this was here. 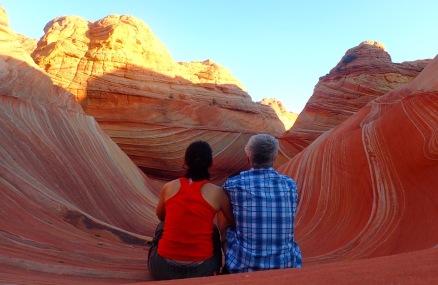 A few days later, in a chance encounter with another adventurous fellow we met in Zion , we learned that the Wave is in fact one of the most prized features in Utah, and that access is heavily restricted : the Navajo nation in fact run a lottery permit system that people have been waiting for years to come and explore! Yikes!!